The words “sound” and “noise” are often used interchangeably. However, while a sound might come from anything that makes audible vibrations, a noise is generally annoying and may even be harmful.

That raises a few questions: 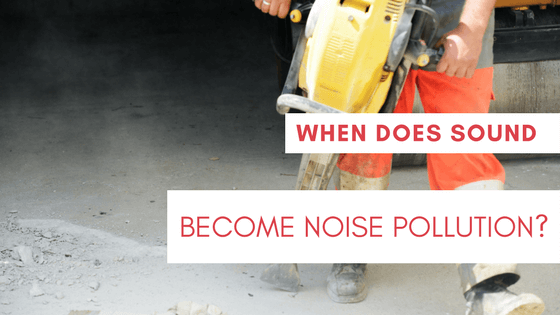 Noise is a normal part of urban life. Whether it is the sound of traffic on the many roads, or the constant blaring of television and radios, sound is constantly framing our lives. Although we have grown used to most common noises, this sound can sometimes become annoying, distracting, or even detrimental to our health or well-being, and that is when noise or sound pollution becomes an issue.

Understanding sound pollution is an important part of modern life, because much like other forms of pollution, these noises can lead to serious consequences on a personal and environmental level.

What is Sound Pollution?

Although sound pollution can be difficult to distinguish from other sounds, the main definition is any sound that is excessive or bothersome, and leads to distractions and disturbances from normal life.

And, generally speaking, these sounds are unnatural and caused by humans or human inventions. There are many causes of sound pollution, but in the modern age, there are a couple of main factors that lead to serious noise related difficulties.

From construction sites to highly industrialized areas of town, modern life leads to very noisy conditions. Sound pollution from the many industrial noise machines we use to sustain our comfortable modern lives can be as distracting as they are beneficial.

Parties have never been quiet affairs, but since the invention of surround sound systems that can play music inside or outdoors, parties have become even louder. Many of the most detrimental causes of sound pollution come from socially related events.

In the case of social noise, sound pollution isn’t the same for everyone. The people dancing at the party probably find the clamor to be acceptable, but their neighbors may not share their sentiments.

How to Differentiate Sounds From Noises

One person wrote an opinionated letter to The Irish Times1 complaining about Aer Lingus. The airline’s company policy is to play international pop music on the planes during departures and landings.

The letter’s author commented, “Was this policy recommended by some passenger focus group consisting only of teenagers? … A message, therefore, to Aer Lingus … listen up, press the off button and allow the oldies (and not so oldies) among us to travel in peace and quiet.”

Clearly, the letter’s author saw Aer Lingus’s music selections as noise, not sound that could enrich the experience of traveling. However, other passengers might enjoy the music and rely on it to calm the nerves that often come with traveling via airplane.

It seems that what constitutes “noise” varies from one person to another. Noise pollution, however, has a narrower definition.

According to the United States Environmental Protection Agency (EPA), “Sound becomes unwanted when it either interferes with normal activities such as sleeping, conversation, or disrupts or diminishes one’s quality of life.”

True noise pollution can lead to several adverse health effects, such as: 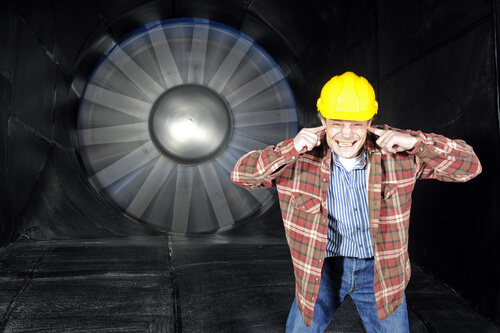 The EPA regulates some sources of noise pollution, such as railways, construction equipment, trucks, and motorcycles. However, the EPA leaves it up to state and local governments to manage noise levels within their jurisdictions.

Noise pollution often takes place on a large scale, affecting countless numbers of people. This may largely be due to poor urban planning2. A residential neighborhood next to a freeway or an office building in the vicinity of an industrial production plant may be some of the worst places for noise pollution.

Governments cannot simply start rearranging neighborhoods to battle noise pollution; the time, expense, and procedures involved would be too much to handle. Hence, the focus should be on finding solutions to reduce or absorb the noise that is already there.

Businesses whose workers receive regular exposure to high levels of noise may recommend that their employees wear hearing protection. Other businesses may allow employees to work at times when noise levels are less.

For example, office workers with a flexible schedule may choose to work earlier or later in the day to avoid having to confront the noise from a construction site that is right next to the building.

However, avoiding noise is inconvenient. It is better to reduce noise, and one way to accomplish this is by installing sound barriers. The barriers absorb sound instead of reflecting it, resulting in a quieter experience for everyone.

Sound becomes noise pollution when it begins to pose a threat to the quality of everyday life. Battling noise pollution should be a topic that receives attention from governments and businesses everywhere.

Controlling noise pollution is a big part of protecting the environment and our own happiness, so as we strive to keep noises down we can truly change the world, or at least help our neighbors to sleep a little bit better.

Learn more about treating large-scale and commercial noise problems with our team at Sound Fighter Systems, call us today at 1-866-348-0833

We originally selected Sound Fighter Systems because of their reputation in the sound wall business, and we did not have the luxury of time to deal with any companies with lesser (...)